I received a phonecall about 2 weeks ago asking of I was interested to step in as Capt on a 25m Ferretti as the permanent Captain unfortunately had had a heart attack so I thought it would be ok to help out for a few days and said I was available. 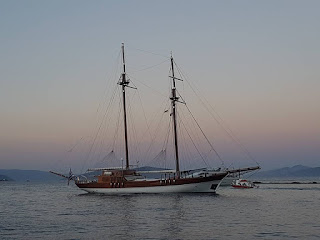 Subsequently I was contacted by the Owners office and had to send my requisite paperwork there as well as to go and show my face in person. Luckily it was almost next to where I live so could walk over. After having done the paper exercise my starting date moved quickly fwd as the program changed so almost next day I was back in the office with my luggage to pick up some CtM and directions. 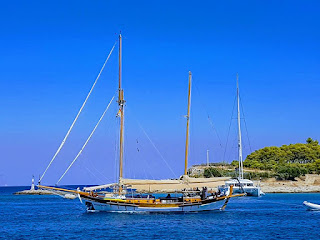 I hopped on the green metro line and trained down to Piraeus and got a speedboat ticket for Poros and off I went. In Poros I had to take taxi to the owners villa to find the boat. I was met by Filipino staff working on the many boats in the private marina and I was showed around by Ray. The setting was excellent, the boat was seemingly alright, systems were tested and showed how they work. Small boat, small systems, Italian design - what could go wrong? 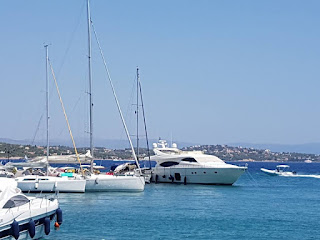 The Orloff fishermens jetty with Ferretti at the end

Next day was departure day, I had a call with the Engineer servicing the MTU engines for the Ferretti and was given a short instruction of how to start the engines as well as the heads up of the easily overheating sb gearbox that was due for service. Pretty straight forward and they started as they were supposed to. The boat was equipped with bow & stern thruster and a colleague of mine had warned me that as fast as you move in the marina is as much you are going to damage the boat so I took it really slowly and was careful with giving engine kicks ahead. The boat was full GRP so any small kick had her surging ahead immediately. Anyway, I cleared the exit channel without incident and soon enough I was heading for Spetses. 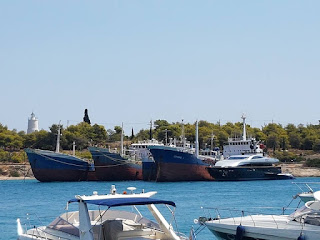 In Spetses our berth was already organised in front of the Orloff restaurant and I let go anchors and moored in the Mediterranean stern-to fashion. I had to keep generators running all the time as the jetty did not have power to offer. There was onboard 2 small gensets in soundproofed boxes and they ran very quietly. Usually they were swapped every 12hrs or so in order to keep running hrs equal and to enable service & checks. 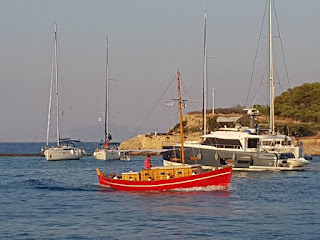 It appeared that the program was fairly static, young guests were soon embarking accompanied by their father and he gave me and the son instructions to what to do and off he went. The next few days proved that the guests were more like vampires and kept under deck all day long only to emerge when the night clubs started opening. I remember when I used to be young like that. These days I value daylight much more. Luckily I had one Filipino boy helping me out in housekeeping and other small duties so I only needed to wear the Captains and Chief Engineers hat, he could have the Chief Stewards hat. 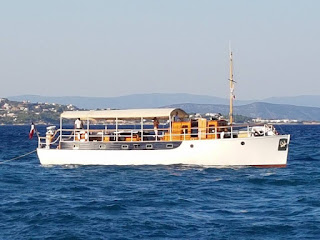 
The boat was working well except that the one genset started smoking and after checking it I discovered the oilsump full with oil mixed with diesel. I also checked all incoming water inlets and filters as well as impeller so it only left me the injectors as fault. I informed the office and they sent a technician within days to confirm the same. This left us with only 1 working generator and I was switching it off every day for a few hours to check oil and water levels are ok whilst the guests were ashore. 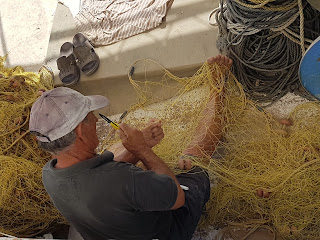 
Every evening I had the entertainment of watching all the yachts scrambling to port in search of a berth. Some were very good in finding their spots, others were late, fouled their anchors and blamed the boats around them for their own shortcomings and I and the whole port could refresh their vocabulary on Greek cuss-words. One morning some other boat even caught our anchor chain but luckily it did not disturb our anchor. 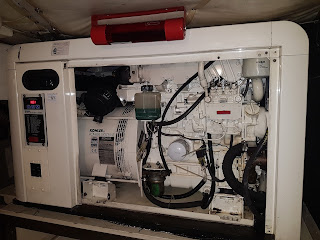 Next I discovered that many of the tank level gauges were pretty much not working at all as I had one day flooding in one of the showers but emptying the tank solved this problem. Luckily the boat even after 10yrs of existence had all the manuals intact and this was a great help especially the Ferretti Owners manual. While I was getting acquainted myself with the boat I discovered the irony that the Master suite bed was located on top of the blackwater tank so in essence the principal slept on a pile of sh*t. Not sure if this was done deliberately during construction or no Engineer/ Naval Architect had ever thought the implications in fung shui fashion of how it would affect the harmonies onboard... 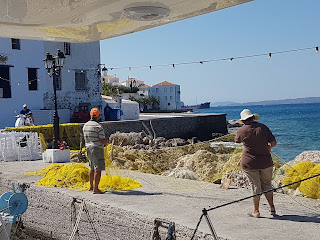 
Every day we were eating with the security detail at Orloff restaurant, it may be a 5 star establishment but I soon lost interest in the menu and the daily Greek food fare. Very delicious but the monotony of it got to me eventually. Then came the day of leaving and the patriarch came himself onboard and said he would take the boat back of which I had no objections as it was his to commandeer. 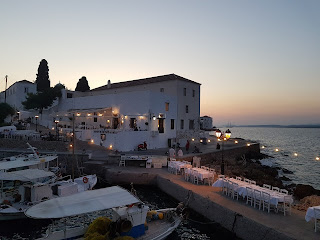 
During the short crossing back to Poros waters we were back in the private marina and I was checking that everything was ship shape and packed my stuff for leaving the next day, my 10 days was up. As it was Friday I stayed the weekend and relaxed at Poros Image before returning to busy Athens. The next week I had to visit the office again to have lunch with the office manager and I gave my observations during my time onboard for what they could be look at doing next winter service period. 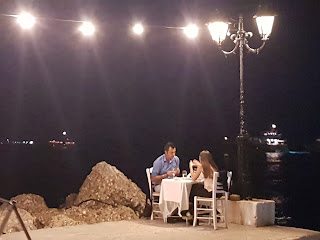 Orloff arranged a table for two