As I signed off Moonlight II in Nice after the open day event and handover to the other Captain, I decided that instead of flying I'd be going to Greece by land. So I disembarked on a calm day and saw classic yachts at the Beaulieu anchorage. 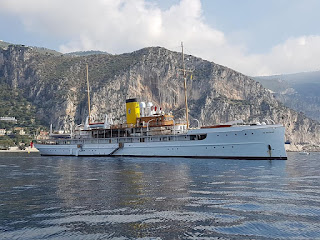 I was surprised seeing s/s Delphine (built 1921) as she had been, according to some media sources, been laid up somewhere in Tunisia but obviously now had found a new Owner so she was back in the game. She did not look very shipshape up close but classic yachts always need a lot of TLC in order to get up to standard. 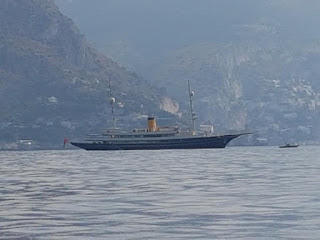 Next I saw m/y Nero (built 2007) that is not a very old classic but built in China to this design, she looks the part without the age.

Well in Nice by taxi I checked the timetables and was disappointed to discover there would be no trains east that evening so I booked a ticket to Milan for the next morning. Next I had to find a room and settled to a cheap and cheerful place next to the trainstation. I walked around town in the evening and could not find any appealing places to eat at so I just bought a ready-made sandwich at a 24h supermarket that then refused to sell me a small bottle of wine as it was after a certain hour. In France? Can you imagine. Did not take me long to walk a few blocks around the trainstation to find a hole-in-the-wall shop that sold me the bottle of wine instead. 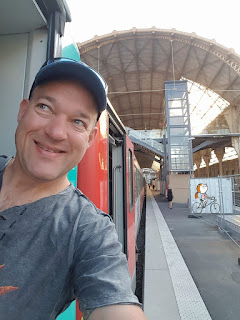 Next morning I was up on time and moseyed over to the trainstation, it is not a big affair so finding my train was piece of cake. Last evening I had bought online a continuation to Ancona so I would have a few hours to walk around Milan. Some hours later the train arrived Milan and everything there was huge. Unfortunately it was a holiday so all shops were mostly closed so I was just window shopping and walking around town like any average tourist. 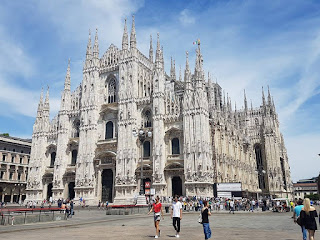 Then it was time to head for the train station again and find my train for Ancona which was no biggie and off we went on time. The Italian countryside is not very interesting, lot of fields and country houses with afew cities in between with various factories visible. Coming to the Aegean coast the line was following it to Ancona sometimes almost in the sea. 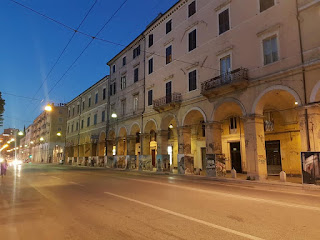 Ancona train station was a very worn out affair and I had to walk abt 1km to the hotel I had booked close to the port in old town. I walked past the quarantine castle and along the coast until I arrived the hotel. Very friendly service and I ended up having dinner there. Next morning I got up early and walked around the old town and palazzos discovering all the things worth seeing, Ancona actually has quite a lot to offer for the odd traveller. 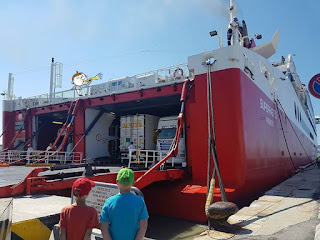 Later in the afternoon it was time to pick up my luggage and get in the port, the boat was a bit late but eventually it arrived and started discharging it's cargo and until it was empty we had t wait on the jetty and it was scorching hot. After some time we were allowed to embark and I found myself a nice sofa to occupy myself on. It was an overnight trip so I had dinner at the a'la carte restaurant and ordered too much of the Greek food but it was vacation time. 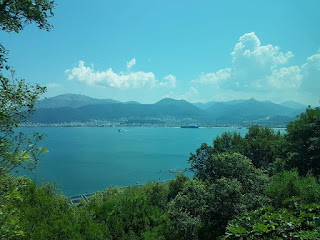 After having slept a few hours on a sofa in the buffet we arrived to the port of Igoumenitsa and I disembarked on the huge open field of tarmac, obviously it was thought the port would be a continuation of the highway or a much larger quantity of cargo was envisaged to move through. By the look of things this has not yet happened. I ended walking up to town and found the bus station to get a ticket for Athens as I did not fancy to stay a night here to explore. I was in luck, the K-tel bus left within the hour and soon enough we were on our way. The trip was quite comfortable and the roads were good, I missed the Rio bridge totally (if we even pased over it), I don't know. Some 5hrs later I arrived Athens and made my way for the metro lines.
at 14:01 No comments: