So it was the last day of the year and people were making lots of plans. Some went to night clubs, some for dinner. Our Interior Manager Mike managed to pull some strings and arranged a table for us at the Allure night club for a fraction of the price they were charging as we were being "permanent" residents in the marina. I was staying put onboard as I wanted to blow the horn at midnight so Mike had brought a tub of cold champagne for me to enjoy, eventually I corked it with my Deck Officers as all other crew was ashore except the watch crew. 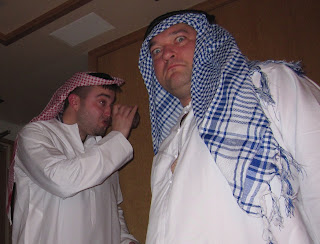 Our stay here had gone from one week to indeterminate length due to unforeseen changes in the Owner's itinerary so we still continue to wait for orders and make the best of our stay in the UAE. So far it has been pleasant except for the poor service rendered by our agent, but more of that later.

Well, I had a quiet evening waiting for midnight and after hooting the horn I went over to Allure to see how the crew was faring. The house was rocking to the rafters and it was jampacked. I sat at the table which soon became apparent as people were so drunk they just came crashing over the table and wiped it clean. After the 3rd time I stood up (my pants being soaked in booze up to the knees by then) and held my glass in my hand. Later on I went out on the terrace to see whats happening there but the music was better inside so I decided to go back. Suddenly the door was blocked and some local boys seemed to have some squabble going on. Then I saw someone coming from the inside and the slogging started, I took a 3m safety margin to the fighters lest I'd be drawn into the fisticuffs. Finally the security guards came along and took the guys off and I went inside and decided that it is better to retire for the night when the crowd got so rowdy and unruly. Luckily none of our boys got mixed into anything. Later I heard there were scores of undercover CID Officers about the premises so I'm sure the "contestants" got what they deserved in the end.

Without any further ado I wish all of you who have had the patience to wait for my updates and actually bothered reading my scribblings a Prosperous and a Happy New Year 2012, may it be a good one for you too. I wish the Universe would in 2012 keep my wallet fat and my body thin as opposed to 2011 when the wish was misunderstood and it went the other way around....


Video from the NY transition, taken by my 2nd Mate Jesse, in the background you can hear the horn blasts