29th departed Tivat for a drift in Kotor Bay, then anchor off Budva.

Kotor Bay is the next fiord inlands from Tivat. There are strict regulations of not allowing washing on ships and also not any other discharges. Most likely due to pollution prevention as the water circulation I suspect is not that fast. In addition they have exorbitant charges for anchoring in place, hence we were drifting as per the advice from our pilot (which also was compulsory). 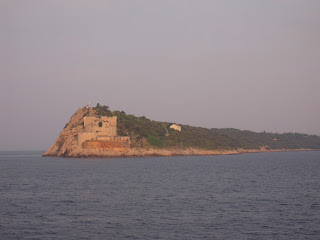 The scenery was very beautiful and we first passed the "Lady of the Rock" monastery and they rang the bell after we gave them 3 long blasts on the horn. After this we went slowly south towards Kotor Town where one could see stairs going up the hill towards another church or monastery. Once done we set course for Budva and arrived there in the evening. There was dinner at Bruno's restaurant.We also checked out another restaurant at Sveta Stefan Bay with a very nice landing jetty but they were full and said a reservation was required. The anchorage in Budva was otherwise ok except for the treacherous string of shallow rocks that crosses the anchorage (it is marked on the chart). It could be a disaster for the uninformed tender driver. 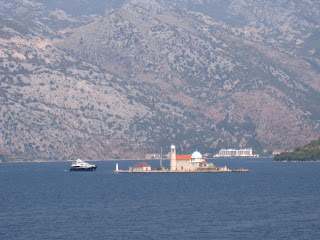 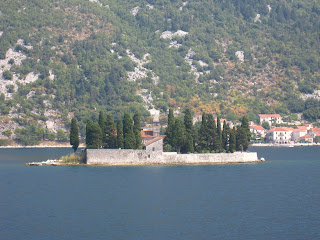 Lady of the Rock

At 6am we heave up anchor and proceed to Zelenika for outward clearance from Montenegro. We drift there for abt half an hour and we get the documents back from the agent all stamped and signed and I set the course for Dubrovnik. We take pilot and berth inside the harbor at the cruise ship jetty.

We depart the port in the evening to go and anchor in front of the Dubrovnik old town. The scenery there is beautiful with the old castle and bastions. Tendering is a must to drop off guests and crew.

Again it was an early departure and we headed for the Croatian archipelago, first stop Korcula Island. At forst we anchor for the day near Badija Island and do some sightseeing there before going stern to at the Korcula. It is very historical as it is the native town of Marco Polo. The holding at the jetty is not very good as we experienced some dragging and had to heave up on our anchor chains to prevent the stern from eventually hitting the jetty. Luckily nothing of that sort happened.

The trip continues in same fashion and we left Korcula at daybreak for Bisevo Island where the point of interest was the Blue Grotto. As the bay in front of the grotto is fully occupied by smaller sailing boats we decide to drop on the other side of the grotto in the next Bay. The water is pretty deep and we have to do a second attempt to get good holding. The view is spectacular with the jagged rocky shoreline. Visitors to the grotto have to purchase tickets to enter the grotto with local rowing dinghies that seat up to 8-10 persons. The entrance is pretty low and people have to duck so as not to hit their head. Inside is totally dark to start with until the grotto widens up and shows daylight that is shimmering through the bottom as the cavern is open under water. The blue color inside is very beautiful. It is recommended to visit the grotto in the morning when the sun is shining into the underwater hole as the day goes on the sun moves on the other side of the cavern and the light gets weaker and weaker. At the shoreside where one buys tickets I bought some locally made wine from the woman selling the tickets. The wine has a very strong taste that would go well together with a red steak. We also did a roundtrip of the Island and found a small village on the other side called Porat that had some delicious seafood available in local tavern's.

We heaved up anchor early in Bisevo and set course for Hvar and arrived there under hours of darkness. At Hvar we manage to find good anchorage on the opposite side of the town. Here yachts have to pay for anchorage based on their LOA, our dues went up to 982€ and the port said it was half price as the season was almost at its end.

Stay the whole day in Hvar. As I had to make a run early morning to town with our Purser to meet the agent I take some breakfast at the plaza that is next to the marina while we conduct our business with the agent. The place looks really nice but I can imagine how deserted it is during the winter months.

4th Departed Hvar, visited Brac Island and arrived Split from where we departed a few hours later for Malta.

In the morning we heave up anchor and sail for Brac Island with destination to anchor in front of Bol village. The town is not very big and we scout out the marinas and landing places. We also check out the Dugi Rat beach (moving beach) that is also famous here. It consists of round pebbles rather than sand and I can well imagine it moves with the prevailing weather. Later I send our Purser to Stari Grad on the next Island as he is signing off and taking the ferry to Split. It was a nice tenderboat ride as the weather was fine. Later in the afternoon we weigh anchor again and head for Split. In Split we take pilot and are greeted on the wavebreaker by our 3rd Engineer Alen who is waving there at us. We make fast amid the hoot and hollering of gays that are on the deck of m/y orient Queen, a cruise ship opposite us and making ready to leave. We make clearance, discharge rubbish and make ready to sail again. Meanwhile Zeljan and Alen have brought some Croatian food for the crew to enjoy. We receive a pilot and depart for Malta at 2230hrs.

We arrive in front of Valletta at noon and embark MTU technicians for seatrials and we drive the crap out of our main engines with 1200 rpm for a couple of hours and after that we proceed inside to make fast at Manoel Island. My reliever is also embarking once alongside and I handover to Tsvetan as I am scheduled for vacation the next day. This trip also finished the summer season for Indian Empress as she enters a service period for her main engines.
at 15:41 No comments: