Years ago on m/v Columbus Caravelle where we once spent an annual docking in Guangzhou for 2 humid weeks I thought that was bad. Then in 2003 when I was working on Project m/y Turama I thought I’d seen it all. Last year in Langkawi Wavemaster I thought I had hit rock bottom but I was once again proven wrong this year in Lumut by Grade One Marine Shipyard that set records in shafting the Client. 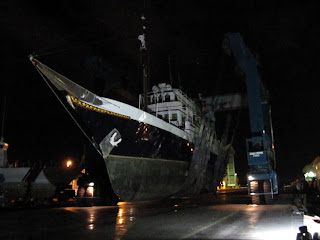 Lifted up after more than 24hrs of wrangling

As you may have glimpsed in my previous blogs that our drydocking has not gone quite as smoothly as anticipated I am not exaggerating this. It is usual that there are always some squabbles that are then solved by giving a bit and taking a bit after some discussions. Not so with Grade One Marine Shipyard. 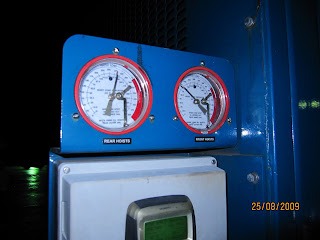 Weight dials on the shiplift put us on abt 350mt displacement

Asia Pacific Superyachts of Langkawi had recommended this yard as they had successfully lifted there abt 10 boats. I visited the facility in May and they visited us in Langkawi in order to work out a quote. The facility is new and seemed promising in my eyes. Once I left Langkawi again there was not much movement on the quote despite emails back and forth. It seemed yard only moved for us when John Orr went down to Lumut to chase them.

Furthermore, APS put themselves as a go between as agents and so in effect we were the client of APS and APS the client of the yard. My management expressed their dismay to such an arrangement and warned APS that they are putting themselves in a precarious position in case problems arise. We were told this is the only way yard wants to deal with yachts, via APS Langkawi, so we digressed. APS assured that there will not be any problems and floating will go smoothly. Well, as it happened all went to hell and relationship between vessel and APS Langkawi is discontinued indefinitely.

Yard has following muppets to show: Operations Manager Fuad bin Rasol, slick prick that promises even the moon from the sky in order to get you to his yard. Seems to have poor conception of reality and hence does not know what his labor is doing or perhaps just pretends to be that way. Haji Nasir, senior costing officer, promises that anything can be done in a blink of an eye, next day goes back on his word. Costing stooge Mahat, Nasirs right hand man, hopeless blabber and interrupts anyone who starts to give him facts or question his facts. Project Manager Azlan is as useless as tits on a donkey, unfortunately he was appointed to us. Shiplift supervisor Captain Ahmad, formerly known in Rebak, Langkawi as Mr. 10%, proud person, cannot take advice. 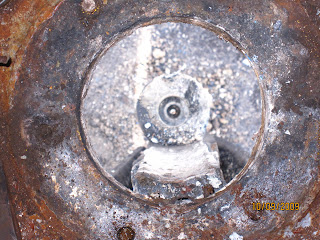 View through our rudder pintles

The only persons that really earned recognition for good work and ability to problem solve was Mr. Saeran and Mr. Teoh, the first is in charge of mechanical issues and did our rudder and props, the latter is underwater hull supervisor from cleaning to painting. Especially Mr. Teoh never vacillated on any job at hand, he just did it.

Project Manager Yin was the only PM that seemed to know what he was doing, he was appointed to do all the other government ships that was being overhauled, when at times PM Azlan lost his only marble the yard sent Yin over for few days and this kept on going during whole yard stay.

As a conclusion of our visit I can say that we have been had totally by APS Langkawi and Grade One Marine Shipyard and I am thoroughly disgusted by their antics. It was not probably the brightest idea to come and do a drydocking in a muslim country during their fasting month but we were assured that it would not affect productivity as they also employ staff from other religions. I initially planned arrival 1st August but it was changed for budgetary reasons. Seeing that the yards clients mostly consists on government vessels from the marine police, coastguard and navy I assume they just do a shoddy job, charge it triple or quadruple and get paid for it, no adjustments are never asked for as it is a government job and bureaucrats just sign whatever is put in front of them. 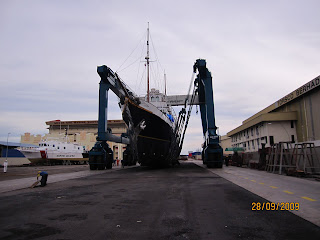 Finally on the way to be floated

Needless to say we will never ever visit this yard again, one can only take so much of being overcharged, held for ransom and being blackmailed.