We left Phuket on the 22nd Aug in order to be in Lumut a day before haul-up so I could sort out any problems from yard side as well scout out the area where I was going (it is un-charted). 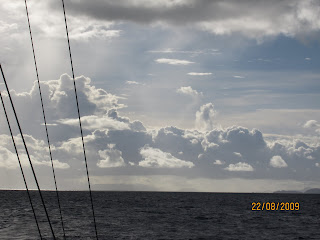 Impressive clouds at Phi Phi Island
The weather was not too bad when we left but became increasingly poor the further south we went. By the time we were passing Langkawi Island it was pouring down cats and dogs and whatnot. 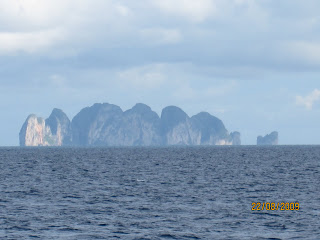 View to Phangnga Bay
John, our agent, who was driving down south called me and told the weather had been equally poor on the highway, only after Penang had the rain let up a bit. At sea we got westerly swell from our sb quarter that was not making the going any easier. As we had plenty of time on our hands I decided to enter from south of the Pangkor Island, the channel is wider there and I had been here in 1998 before so I sort of knew the waters. High seas were still rolling in from the Straits but as soon as we were in shelter of the Pangkor Island it stopped. The mainland side had been developed with tens of highrise buildings compared to 1998 there had been nothing there. 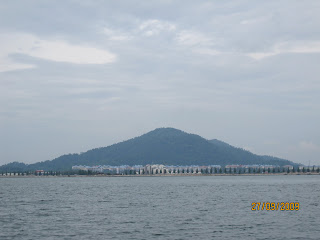 The Navy Colony on mainland opposite Pangkor Laut
Also the channel was better marked than in 1998, there is a 90degrees bend about halfway in the channel. Once cleared we were passing massive naval installations and greeted by the odour of a fertilizer factory that also closely resembled the smell of a brewery. I anchored in front of the Lumut International yacht club that consists of a 2 small piers and a collection of small craft. In front was also anchored a laid up navy vessel, Rahmat, that seemed it had been there a long time.

We launched our tender and took ashore Kalpana who needed medical attention as her wisdom tooth had started acting up. John met us at the pier and I got my clearance papers handed over as well. After this we headed up the channel to scout the “un-charted” area. We passed a flour mill and cargo piers until we reached a fork and took off right, shortly after, we arrived in front of Grade One shipyard. The 75m double pier where the lift was going to happen was flanked by three 60m long offshore vessels. We surveyed the waters in front of the pier and found ample water there except to the immediate west where we discovered only 3-4m of water, it appeared to be a mud flat just at the western pier end. Having done this we headed back to the ship and it was time for me to meet the yard people.

At the yard I met up with the lifting Engineers and we went through the way they wanted to lift up. It was the same as in Langkawi last year, stern first until we were inside of the piers, then stop. It appeared that the shore side was a bit shallow too. Instead of hauling the next day the yard wanted me to arrive same day at 1530hrs. Oh well, said and done, I was happy to get the show on the road. John dropped me off at the marina where I got a refreshing rain shower on the way back to the ship. We hoisted back our tender and anchor and sailed up river.

When we arrived the lifting piers I had a westerly current and wind going on and I saw it was not going to be an easy task to get the boat in with all elements at my broadside. My first attempt failed as I could not keep my bow up to the wind and current so I had to abort and try again. My 2nd attempt I was keeping my bow well up wind and tried to approach with my stern and then let my bow turn when I was easing her in between the piers. Easier said than done, I got stuck in the mudflat just west of the piers so I had to redo my approach. My 3rd attempt was successful, Saini was giving me good instructions of the situation aft and I backed in with speed. My bow fell again but I was in before it was too much. No damages either. We handed lines ashore and the yard started to position the shiplift and prepare to put is on the hard stand. My next story will about our works in Lumut, until then…
at 13:26

Is this the normal standard for dry-docking ?