As agreed I interrupted my vacation to take Kalizma to Langkawi and back. The purpose was to get some movement on the engines and pick up stuff that I had been shipping to John over a few months time. The main issue was to get our aft emergency exit hatch so we could install it here in Phuket before we would leave for our drydocking in Lumut.

I came onboard on the 31st and had a short recap with Avnish, confirmed we were all stocked up, sent passports for clearance and so on. On the morning of 1st Aug we left in sunny weather conditions. As we got out of the channel and sailed down Ko Yao Yai the sea got more rough, not bad but it shattered all our hopes to be able to stop for a dive during the passage. We slowed down and pottered on for 7kts and reached Royal Langkawi Yacht Club early morning.

In Langkawi I was met by our usual agent, John Orr, and the morning went swapping gossip and sorting out the business at hand. Tickets for Richard and Martula had been arranged so they could leave for their annual vacation. Later on John delivered shipments and I could see that I was missing one packet. It was again off to go sending emails to the shipper. In the evening I was invited out to Pantai Cenang for a private party.

The venue was at TJ's pizza restaurant where I had had earlier I think the best pizza I ever had in Far East. I met also previous acquaintances like Brendan and Lyn and several other familiar faces whose names I can't recall (apologies). 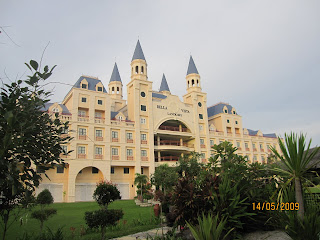 The Hotel at Kuah waterfront, looks like a piece from Disneyland

Monday morning on 3rd our freezer contractor started work on our freezer that had been long pending. Richard and Martula was whisked off to the airport. I got reply from shipper re: our missing parcel that it should be on the Island already. I relayed the info to John who discovered it should have flew the day before but it hadn't, then after much wrangling and knocking on doors it was finally located in the Customs warehouse. Our freezer contractor hit a few snags in his installation program that we had to postpone not only for him but also for the missing shipment of our anti marine growth system.

Tuesday 4th I woke up to nice sunny weather. Things were going my way for once. the Cathelco package was found and delivered onboard and Michael, our freezer technician started the freezer late in the evening. Only in an hour the freezer went to -15 degrees, a thing that in India was told us to be impossible. In the evening I was invited by John to come to his pad for his wife, Pam's, birthday party.

Wednesday the 5th was a disappointment weather wise, from early morning a strong breeze blew from west causing us to be pinned in the RLYC marina's N-S pier. John came to pick up the passports for clearance so I could depart when I wanted. I was constantly watching the wind meter but it refused to budge, on the contrary it went up to 40kts at times. The weather forecast was not much better, it promised better weather after 2 days. Finally, in the evening when the sunb started setting the wind came down a tad so that I deemed it safe to maneuver. I chased my crew to disconnect shore power and start engines whilst also letting John know that we were leaving.

Departure went well although I had some flies in my belly. I left my forward spring at the corner of the pier and slowly eased her over the corner and turned my stern against the wind and out of the port. Once I could see that I was good to go astern I started going slowly. Guys on the pier helped the going with fenders and I used the bow thruster to keep her off the pier. Having the bow clear of the corner I had to use my bowthruster the other way so my stern would turn more towards the port exit. The current was still flooding probably due to the strong wind that had prevailed the whole day. I cleared the wave breaker and turned around to face west and for Phuket. On the way we celebrated Jyothi's birthday in the exit channel and had some cake and dinner.

Once we entered the open seas at Pantai Cenang I confirmed the weather forecast, waves 4m high was rolling in from Indian Ocean. Luckily my stewardesses and other knew what I meant with bad weather so they had prepared the ship properly for rough seas. After entering open waters part of my crew went senseless from seasickness as usual. Luckily they were not my watchkeeping crew.

Next day was not much better, same weather prevailed and it eased down a bit while going north of Phi Phi Island, then it was easy going towards yacht haven. I missed the high water but was informed that current and wind is not bad so the marina allowed me to berth a bit later. I tied up port side along side at our usual corner without any mishaps. My crew was happy to have a stable deck under their feet again. Anyway, the cleaning started for some minor items that had broken during the passage...

Nice blog my friend.I have added your site link on my blog as a result of you adding me on yours friends list.Thank you.

Thanks for the link :)
Appreciate it...