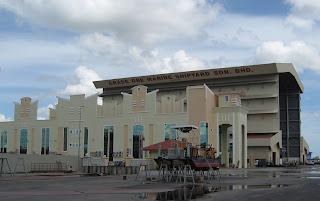 G1 shipyard headoffice in Lumut, Malaysia
As for crew matters I got back Sunil and Rajaram rested from their annual vacations and I sent Vivek for his holiday.

We actually arrived from Langkawi already on the 26th May and I did not stop on the way for diving as the weather was really poor, windy and rainy all the way. We arrived at Yacht Haven 2pm with no hassles, I experienced some funny cross currents pushing us off the pier although it was slack water so my approach was a bit slow but finally we managed to tie up in an orderly fashion.

I was met by the Marina Manager Zara Tremlett on the pier after finished with all engines. Our local agents, Gordon Fernandes and Toby Koehler arrived later on in the afternoon and as we started with the official paperwork and then changing news and gossip with some Kingfisher and snacks we soon discovered it was almost midnight.

The rest of the week was spent contacting anew old contractors for planned jobs and getting worklists and quotes made up.

Next weekend 30th I visited Jira in Trang province and we did an outing to Satun and the Wang Rajan bordermarket at the Thai-Malay border. Thai nationals could wander into the Malay side and do shopping there, I could not as my visa would have been voided. Very similar to the Thai-Cambodian Aranyaprathet border market that is popular for Bangkokians to visit for shopping and gambling (in Poipet).

Near the border was the “Thaleban Nature Park” which we visited shortly on the way back. There I saw and heard mountain frogs, the noise was deafening from such small creatures.

1st week of June we got dayworkers and contractors galore onboard and the usual maintenance hula-baloo started.

Following weekend 6th I took Richard and Jyothi out for an outing to Trang where we visited the local aquarium and sea-lion show.

14th June was the International Marathon run at Laguna and Avnish arranged for voluntary crew to sign up.

Next week I started a detox diet and had only fruit juice for next 2 weeks just to see what the effects were. The experience was not too bad but I always felt a sting of jealousy seeing people eat and it seemed to me Richard was making an effort preparing all kind of good dishes or maybe it was just my hungry imagination.

Next week went meeting with Avnish and putting him in the picture of what is happening on the yacht workwise and re: our commercial certification status. I printed out reams of statements, lists and reports covering the handover.

On the 27th was hashing day for Phuket HHH and we decided to join. Saini and me had been running there before but Martula and Richard decided to join us.

Finally, on the 28th morning I whipped out the scale and could ascertain that I had lost abt 8kg’s during my 2 weeks juice detox combined with evening jogging with Saini.

At noon we headed for Sarasin bridge with most of our crew for a handover lunch. Just after crossing the bridge, turned left to the bridge bank, there is a seafood restaurant that serves lovely and inexpensive food while watching the tide swirl by. I also enjoyed being able to eat again after 2 weeks of chugging juice. Once the lunch was devoured I took my leave and was wished a Happy vacation for the next 30 days.