So, we left Mumbai finally and were underway to Langkawi via Cochin. The reason for stopping in Cochin was to take cheaper fuel from there as in Mumbai nobody was selling tax free fuel.

Once at sea we got the waves from our stern and a strong NW'ly breeze. Everything was hunky-dory. Our Naga girls got sea-sick of course and for the 1st couple of days resembled zombies as we were trying to get them cheered up. Finally I resorted to giving them motion sickness pills so that fixed that problem. 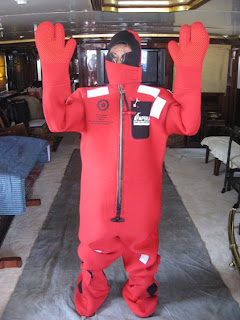 Kalpu prepared for the worst
We arrived Cochin early morning on the 19th April. We tied up at Mattancheri Island and I met Augustine from Goa and Mr. Judy, our agent. I had prepared a record amount of paper that the agent specified me to have at hand. Indian bureaucrats really support the paper industry. Once all was done, the mandatory bottle gifts were asked for. I complied happily to get them off the ship.

In the afternoon I managed to sign on Richard that had arrived from Mumbai via land as he had to be left behind for some paper work. Then I went ashore. I saw the Dutch Fort and the Jew town. That is really the only attractions that can be mentioned about Cochin. The Jew town is mostly full of shops catering for the tourists, selling brass statues, perfumes, fragrant oils, textiles and whatnot. I even slipped for once and spent my last rupees on brass figurines of Shiva, Parvati, Ganesh and another one half Shiva half Parvati. Then I got some fragrant oils, I settled for Jasmine and Kerala flowers, wonder who I will give them to. Toddy was also sold at many bars in Cochin, I sampled one bottle with Richard and must say it was much tastier than the toddy I had in Burma.

In the evening after our shopping spree we went with Richard to a hindu temple where the deity was the son of Shiva. We paid to do pooja and I asked for favorable weather for our remaining voyage. It turned out Richard did the same.

In Cochin the men wore mostly lungi's (sarongs) and in the heat they were lifting the hems all the time for better "ventilation".

After wards we went out with whole crew for dinner. Our first restaurant was not really that good so we just had some drinks and then headed out for another restaurant called the Tandoori. I and Saini had to leave earlier as a heavy rain shower came and we got some leaks onboard so had to go and help the standby crew.

Next day we received bunkers and filled our fuel tanks up to the brim, well, only 98% as per good seamanship standards. Then one of our gensets malfunctioned and we tried to find spares to no avail. Meanwhile I went out with Richard for last provisioning. We also got for crew lunch boxes of biriyani made at the famous Kayees restaurant, the walls inside were plastered with news clippings.

Pilot was booked for evening as we could not delay or wait for spares for the genset, so I decided to depart as the weather forecast also looked good.

Once again away we left Cochin with last rays of the sun and headed south along the coast, when passing the Guld of Mannar the wind got a bit stronger and a day later while rounding Sri Lanka the wind was still persisting at force 4. After that the close we got to Malaysia the wind was getting weaker and weaker.

Two days enroute our freezer broke down, Richard was boiling meat by the kilo in order to preserve it somehow.

Three days enroute our A/C packed in. Needless to say the ship turned into a furnace, not only was the sun heating up her but also the engines. Crew slept out on open deck. Bridge was the only place where you could stay inside reasonably cool as we had both doors open and a cross draft was cooling us down.

On the 26th we entered the Straits of Malacca and as we were passing north of Sumatra we could see the mountains in the horizon and Rondo Island just N of Sumatra. It looked round as the name suggests. Beside the Island were jagged stone pinnacles sticking out of the sea that looked almost like the Stonehenge from a distance. All meat was finished so we were on vegetarian fare from this day onwards.

The last night crew was forced to seek shelter inside as we had rain showers coming down. I resorted to sleeping inside the tenderboat, the cover held rain just fine.

The last day we were not so much scorched by sun as the skies were overcast, the humidity was in the 98% region. We sighted Langkawi Island on the 27th around noon, after that it took us about 2 hours to get up the channel into Kuah and finally alongside Royal Langkawi yacht club.

I was met by a familiar face, John Orr our agent and after the initial chit-chat he went to clear us into the country. In the evening John invited all crew for some drinks at the RLYC bar and later on we headed out for "The Pier" restaurant and had some delicious Thai food. Captain Graham of Queen of Andaman joined us there too and we swapped stories of latest gossip in the region.

Of course the 1st thing in order of our list was to get our A/C fixed. I'll let you know what happened to that in my next instalment. Until then.
at 19:34