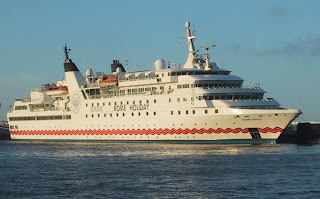 
I had finished my Captain's Class and had been in contact with Crossline whether I would like to go there to start as Chief Officer on m/s Atlanta Forest. I had tentatively agreed on this but, was suddenly called up from BMC and offered a steady Chief Officer's vacancy on m/v Columbus Caravelle, the younger sister ship of m/s Delfin Star that I had worked on last summer.

I did not take long to decide where to go as the salary was excellent, I knew the job and the ship was also "fresher". So, I called up Crossline and cancelled our agreement to the Managers dismay and I was once again on my way to the Far East. 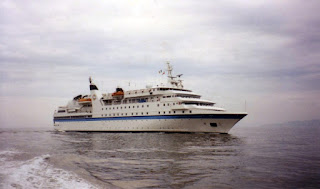 
As told earlier m/v Columbus Caravelle was sistership to Delfin Star and both remains of the defunct Delfin Cruises now under Finnish Government Ownership (through offshore connections) and being managed by Baltic Marine Consulting (BMC). Columbus Caravelle (CoCa) had earlier been chartered in Singapore and Indonesia for similar casino cruises as gambling is forbidden so the ever inventive Chinese chartered these ships to go out on International waters to play cards. It is also perhaps ironic that in the collapse of Delfin Cruises the Finnish Gov't became indirectly involved in dubious Far East gambling activities by their Charterers.

Now Delfin Star had been sold and there was need for more Casino ships in the administrative region. My Boatswain Jimmy from Delfin Star was Bosun on CoCa as there had been some crew changes on CoCa's way up from Singapore. I had as Captain Ralf Jacobsen who was interchanging with Captain Bo Rosenqvist. As permanent Chief Officer was Karl "Kalle" Karlsson. Ralf and Karl resigned later as they wanted to take on liner pilot positions in Finnlines, (which they eventually got and pensioned themselves from there). As new replacement came Captain Reijo Granqvist.

The safety culture on CoCa was better than on Delfin Star as Captain Ralf had implemented a rigorous safety program from his years on Caribbean cruise liners. We still had the same problem with the Chinese crew but with this charter we had them on our side and we could discipline the crew to get better. Also the Hotel Manager, Danny Chong, was an energetic Malaysian that never seemed to run out of steam and ways to solve any issues. Also as time went by the mainland Chinese became better and better and once when the crewing agency visited us onboard they said many crew had positive things to say about me and other Sr Officers. I was positively surprised that the word had gone this far.

Hong Kong itself does not offer great sights but as I stayed there I came to visit all places worth seeing and probably not worth seeing as well. It is a bustling city where the never relenting pace pulls the weaker person down. It is not a place to grow up but to make money in. It is like the song New York, it never sleeps and keeps changing constantly, wherever you look you can see building development going on.

As a highlight of these stints I can mention that we were there when Hong Kong was officially handed over to China from British rule, eventually HK remained as a special administrative region for next 50 years and basically nothing much changed for the ordinary citizens. I think the biggest changes were on the political level as well as the gloomy reporting of Chinese military rolling in to the region. The festivities however were huge, the royal yacht Britannia attended for Prince Charles and the fireworks lasted for ages, it was a pity that it was raining cats and dogs that evening. Could have enjoyed the display more if the weather had been better, after all we had the best viewing spot from Victoria Harbor at our mooring buoy.

Eventually this was for Britannia her last function and after this she headed for the Philippines. Then it was onwards back to UK where she was laid up in Leith and where she is now on display for the public. I read a special report in the South China Morning Post how everything was still in original condition and nothing had been upgraded since her launch. Boy did they seem to have a lot of brass to polish.
at 22:37 No comments: