In -86 I got a long run on Bore Queen replacing a deckhand on sick or paternity leave as I remember and it was good line, took us about 2 weeks to complete a round trip that took us from Helsinki - Kotka - Hamburg, Germany - Terneuzen, Holland - Chatham, UK - Cuxhaven, Germany - Helsinki.

In Terneuzen we always got a night over in port and many times I volunteered as the night watch (20-08hrs) because it gave good overtime and next morning I could go sightseeing, not that there was much to see in Terneuzen as it was a small village opposite of Vlissingen in Flanders along the Schelde river. The docks were behind a lock so there was no rope watching per se, only during loading and discharging that happened in daytime, very civilized. In those days one usually looked for stuff you could not find at home and there was quite a lot of that, especially in Holland & Germany the electronics were cheap. I once bought a microwave oven for my mother and it is still 35 years later working. 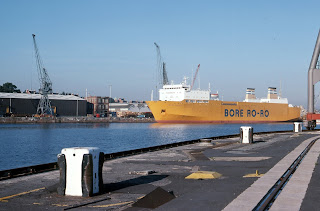 
In Chatham we usually stayed 2 nights, I think the issue was waiting for return cargo as the remaining cargo discharge was done in a day. Here we also stayed behind a lock, the port was actually an old submarine port from 2nd WW. One could still see the hidden grooves for mooring ropes so submarines could be submerged in port in case needed.

The quiet evenings many crew booked theatre tickets in London and saw Cats etc. I was too young to appreciate such things and preferred doing the night watch and go daytime mooching around in London. I'd get off at 8am and get going in the morning train with the blue collar folks. Sometimes there was space only available in vans with no benches and people reading their news papers sitting on the floor.

Once in London I'd get a day pass for a pound and travel the tube everywhere, Carnaby street for leather products, High Street to buy music at Virgin. I remember I was once rescued by sure serious accident as I was walking along with my head up gawking at buildings when I suddenly felt someone grab me from behind and a car whizzed past me. Had that man not grabbed me I would have stepped under it. After a few hours in town I'd get the train back to Chatham and get a few hours of kip before the next nightwatch.

All the the other ports along the line were pretty busy, the main cargo was always loaded in Kotka as sto-ro so it was time consuming and we usually got a night out there as well. In Hamburg and Chatham we'd get the people over from the seamans service (MEPA) bringing papers & magazines and changing our video library (VHS) and then the Seamans mission (like Stella Maris). Usually they offered rides to the mission where one could come for a cup of coffee, go around shopping or just talk to the priest if you were inclined like that. In Terneuzen I think the people from the Antwerp mission would come to visit us.

Bore Queen had a nice crew, they were very close knit I think because they had a few years charters down the west coast of Africa and crew did not change except going higher in rank or pension. Like on Bore Sun I was a junior 17yrs of age and next eldest person were in their 30's and several were in their 50's.

Then in 1987 the other persons leave was finished and I was transferred to Bore Sun where I worked until it was time for me to do my military service. 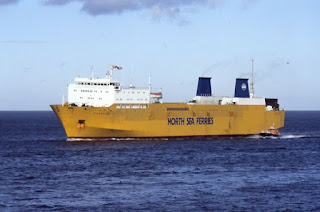 
As a footnote to the vessel, she was lengthened like her sistership 30m and renamed Norqueen in 1996. Next charter put her on liner traffic between UK and continent for P&O ferries for the next 20yrs. After that she was sold and sailed for Greece to be laid up and was renamed several times and then she was sold again and nowadays located in the Philippines as Supershuttle Roro 9 in 2013. I think that is where she probably still remains to this day (2017).
at 01:48 No comments: