Having done my 1st stint on my budding seaman's career I thought jobs are going to roll in and I was sitting on my laurels at home waiting. Nothing came, nobody called so I had to start calling around again with the aid of the trusted seaman's calendar Shipping Company section. As Finnish shipping was going through a depression things were not good on the job front so I was getting the same "no have" replies as a few months earlier. 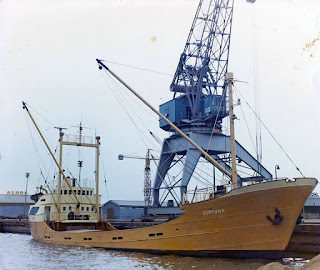 Then finally I got an offer to join a small coaster with Nord Shipping, a small one ship company run by 2 brothers. One was Captain and the other in the office handling charters I suppose.

One has to remember that in these days there was no GSM mobiles, only telex, fax, VHF and the overtly expensive NMT (nordic mobile telephone) network that stopped working after passing Denmark. As she was a coaster she had no telex or fax facilities so only means of communication as I recall was VHF calls via coast radio stations (public patches into the phone network) so any confidential matters that you did not want the public to hear was better to go via Agents offices or by using codewords.

This was none of my business as I signed up for one voyage to UK to replace a deckhand on sickleave. I joined ship in an obscure port on the W coast, I think it must have been in Pori and she loaded bulk for Gunness in UK, a total of 300tons in 2 holds. We left for Uk the same day or the next. Crew was minimal, Skipper, Mate, Engineer, deckhand and me. The skipper had his wife sailing with him.

It was a big change compared to Bore Sun and I remember 1st morning I got up for breakfast and there was none. I think the deckhand told me here is no service, you make for yourself what you want, the stuffs all in the cupboard and fridge. Skippers wife prepared lunch once a day so at least something warm was gotten every day. The Engineer was ex Finnish Navy and more or less constantly drunk but kept the main engine running as long as he remembered to fill up the day tank.

I recall the Mate trolling him once on the aft deck by saying that the Navy just cultivates drunks, god help us if there would ever be a war again. The Engineer was furious and could barely sit on the bollard and spat "I tell you that the Navy does not allow drinking", oh well, he must have been taking back the damage then. The skipper went down there every so often as well to check that everything was shipshape. I also furtively followed the Engineer doing his greasing rounds that had to be done at regular intervals as the engine was from 1958 it had hardly anything automatic. The valves were exposed on top and had oil cups on top, the propeller shaft had to have grease pressed in and the engine airbottle had to be filled. Soon enough I was doing these rounds as well, once I came up on the Engineer sleeping on the engine room floor with some rags as a pillow.

The trip progressed and we went around Denmark to save money on the Kiel Canal cost and then headed for Gunness (next to Hull). We were lucky with the weather and I had adjusted to the noise from the engine (only 2 thin metal bulkheads separated me from the engine room) and I also got used to the freezing water in the common bath room, made showers very economic. As we were just doing abt 9kts the trip took quite long compared to Bore Sun that did it in 3 days even with a pitstop in Germany we made it in abt a week. A day or two before we reached UK we ran out of fresh food so the Skippers wife pulled out frozen peasoup from the freezer and warmed that up.

The riverpassage up to Gunness had to with the tide as we were passing Hull and Goole and going I think as far up as possible with our size of ship. There were no locks so once alongside ropes had to be watched and at low tide we sat in the mud. The discharge took a couple of days and I remember we went for the local pub and I was very impressed by a local damsel I met. The Mate got absolutely wasted and next day I had to keep him out of the way from the longshore men as he in poor English declared unsavory things he'd like to do to the British Queen. He started getting sidewise looks so I told him to shut up and get onboard before he gets black eyes or something worse. Soon enough the next day we had the holds empty and were waiting for the tide so we could return to Finland, this time in ballast.

Also the return trip was uneventful, good weather prevailed and a week later we arrived to Rauma and the office brother came onboard to get the latest news and I suppose to give news about the next cargo. He was also going to Turku and so I also got a free ride home when I disembarked. Sadly they never had another position to offer as it was a pretty exciting way of doing business and going to small places instead of the impersonal big ports.

As a footnote Nord Shipping sold Fortuna to another entrepreneur that one autumn in 1987 was doing the sugar beet run for the factories and in those days the loadline was on the wellingtons so to speak, as long as no water came into the wellie when standing on deck it was ok. When loading sugar beets the hatches were left open so they could take as much as possible when being paid by the ton so she must have departed fully laden and when going over an open stretch in the archipelago during bad weather waves must have splashed into her hold and subsequently she capsized and later sank. Fortunately all crew (2 adults, 2 children) survived as they managed to climb on the still floating hull and they were picked up by a passing passenger ferry, m/s Wellamo. Later she sank and is charted as a wreck. This accident followed by other similar ones made the Finnish maritime administration to have the coasters close their hatches as is supposed to.