When I was doing my General rating school back in 1984-1985 we were sent as apprentices for one trip on various Finnish cargo ships, usually a roundtrip lasted for a week or so. I was with another 3 guys sent to Bore King and as I remember we embarked in Helsinki and sailed for Kotka - Gothenburg - Helsingborg and back to Helsinki.

The vessel was pretty new in those days, built by Rauma Yards, Finland in 1980, LOA 141m and carrying 8000DWT with a crew around 23persons and able to carry 12 truck drivers. Most overhauls and services were carried out by the crew themselves. It was only later that the cuts were coming in place and crew was reduced and riding crews were implemented.

The week seemingly passed fast and as young lads we did not want to go back home at all and maybe somewhere someone heard us as when we were going from Kotka to Gothenburg the ship hit a huge icebuoy in the middle of the Baltic sea. It must have broken its anchor and been adrift on the shipping lane. 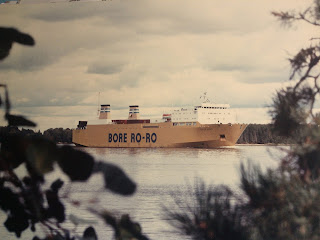 The buoy hit our propeller and we were losing hydraulic oil so fast that we had to make an emergency stop in Gothenburg drydock to replace a propeller blade (they were CPP's). This gave us 2 days more as with cargoships time is money and the job was carried out really fast.

I recall we went one evening out to see Gothenburg with my classmate and took a bus into town and when we were coming back we did not recognize ourselves and asked the driver where the drydock might be and he replied "My dear child, you have gone to the wrong direction". We had not realized it was a circular line and we were at the other end of the circle. We had a to wait a bit and the bus soon started its way toward the port.

After this 1st time apprenticeship I worked on her as Ordinary seaman several times in the late 80's and then she was lengthened abt 30m in the 90's, renamed to Norking and sailed between UK and the continent. In 2011 she was sold to Greek ownership & renamed Alios. 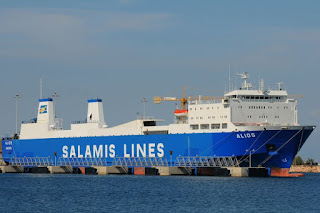 I actually saw her in 2015 in Sounio port and wondered how she looks so familiar but her color was blue so it took me some time to recognize her from the lengthening as well. Shortly thereafter she dragged her anchors whilst in port during bad weather and destroyed some yachts. Looks like someone had put an evil eye on her as she ran aground in 12/2016 and probably that was the reason she was sold to shipbreakers and towed to Aliaga in 04/2017 for breaking. Long and colorful lifespan.
at 13:13 No comments: