We departed Phuket on 12th of Aug for Langkawi. Weather was again fine, only when we got out of cover Ko Yao Yai did we get swell in from the Indian Ocean. We steamed on for the whole day and anchored for the night S of Ko Rawi (Butang group). Next morning we awoke to marvelous surroundings of high Islands covered in lush green and specked with white sandy beaches. 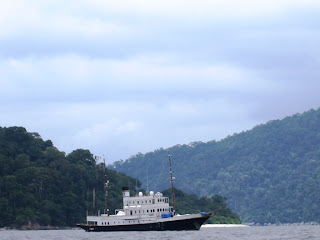 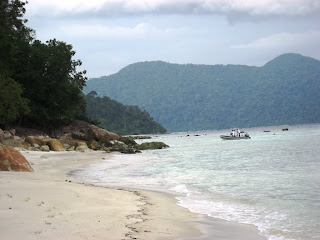 Ko Rawi
Morning 13th Aug was sunny and spent making a dive around Ko Palai and another on the bay at Western tip of Ko Rawi, we saw a great deal of sea life (puffers) as well as loads of giant clams. The coral here is very nice and unspoiled, also absence of tourists is notable, it might be otherwise during high season of course. At Ko Rawi the coastal cliffs goes straight down to several metres and divers are rocked by wave surge. 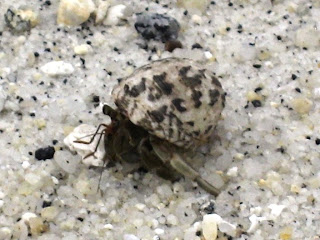 Beach had a lot of hermit crabs
Afternoon was partly overcast and spent setting up for a beach barbecue on Ko Rawi and some snorkeling. The coral heads S of Ko Rawi were numerous and colorful. The beach on Ko Rawi had many hermit crabs that were running about everywhere. I took to exploring the Island and found a natural fresh water stream that I followed up to its source, the jungle elsewhere looked impenetrable, consisting of thorny brush and ancient trees. 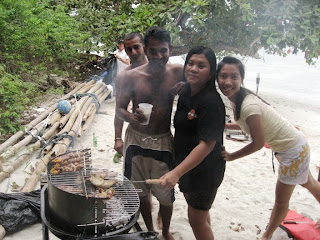 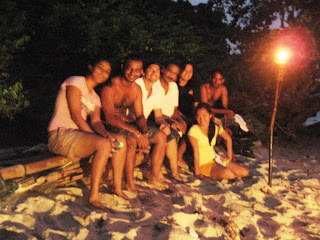 BBQ
The fresh water itself out of the mountain was very cool and refreshing and I took several dips in the streams naturally carved out hollows. Once back at the BBQ it was getting dark and we fired up the grill and enjoyed the sunset accompanied with dinner. When darkness set in petrol lanterns were lit and we sat around joking and telling stories while enjoying some more grilled food. At abt 9pm we packed all gear in the tender and got back onboard for an early night as we needed to haul up anchor in time for us to arrive Langkawi HW. 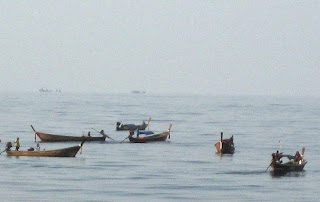 Seagypsies
14th morning 6am anchor was heaved up and course set for Langkawi. On the way we passed a big congregation of sea gypsies. The weather was overcast and dead calm. We arrived Langkawi at 11am and made fast sb to floating pontoon at Wavemaster shipyard. We had arrived to the purpose of our voyage – 5year class renewal survey and routine maintenance.

This month Kalizma did not move from her berth, we stayed put for ongoing maintenance works. We have upgraded the deck lighting, installed a diving ladder and UV covers onto the tenderboats. All decks got a fresh coat of varnish as well as rust was chipped off on exposed metal parts and repainted, teak oil was applied to all railings. In the Engine Room various piping works related to the aircon was renewed and modified for the better. 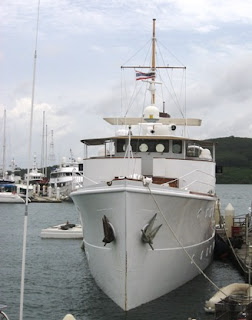 M/y Calisto in Yacht Haven (sistership of Cousteau's Calypso)
Crew events:
Jyothi rejoined the ship on the 23rd with renewed vigour. Richard has not yet returned from his prolonged vacation and the new deckhand is still pending. Vivek left for a short sojourn in India to escort his family home.

Last weekend in Phuket (little did we know)

Saturday undersigned was invited to a BBQ evening and watch rugby at the Agents, Gordon Fernandes’ pad. Kingfisher sponsored 2 cases of beers to the cause. The game turned out very exciting as New Zealand took the lead in the beginning after being on the loss but, finally in the end, lost to Australia. 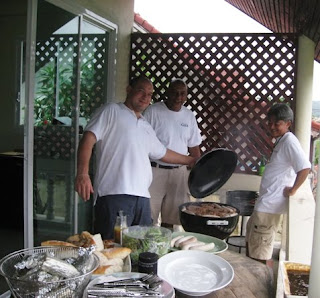 BBQ @ Gordon's pad
On Sunday morning we set off with the volunteers (some crew selected to spend time on their own) for a picnic in Phangnga which consisted of Tom Yam Kung soup, Phad Krapaow Moo and Nam Phrik Num with Khai Tom washed down with Kingfisher beer for those who wanted. We also visited a local handicrafts and snacks stall where crew bought rattan souvenirs, handmade hammocks and a Thai flute for Raja Ram. 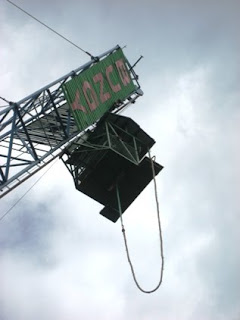 Bungy crane
After this we drove on to Phuket Jungle bungy jump venue where Captain and Saini proved their courageousness by jumping 50 m down tied to a rubber string. What an exhilarating experience!

Next we went to Phuket Go Kart circuit where those who did not dare to jump could race to get their adrenaline levels up. After 10 minutes of go-karting on hyped up mini racing cars it was time to return towards Yacht Haven. 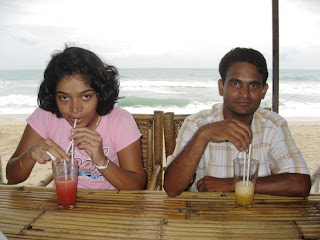 Refreshments @ Surin beach
We took the scenic route via Patong - Kamala and Surin beaches enjoying the scenery of the west coast of Phuket Island. At Surin beach we stopped and strolled on the beach admiring the big breakers rolling in from the Indian Ocean and a few brave youngsters body surfing the waves. Refreshments was enjoyed at a beach bar after which we headed back for Kalizma, by this time it was dinner time for those who still had energy for it. 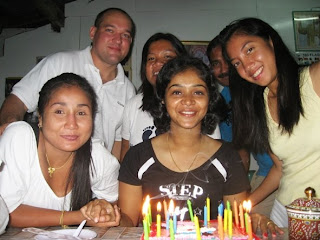 Jyoti's birthday
On 5th August was Jyothi’s birthday. We celebrated it with all crew at Mama’s & Papa’s seafood restaurant. The sumptuous dinner was topped off with a Minnie Mouse vanilla cake and a 24k handpainted teacup was presented to Jyothi as she is an avid tea drinker. Happy birthday Jyothi, we all hope you enjoyed it!

Nai Yang beach
On the 12th of August we will head out for Langkawi and do the long planned drydocking, until then, ta-ta.
at 12:17 No comments: