As I had finished and graduated from my Officer's Class in 1991 it was again to go all out to shipping Companies to try for a job. Bore Line could not offer me a position as they had sold a couple of their ships and had more people on their lists than they cared to have. 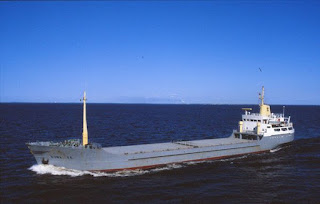 So I turned to the trusted Seaman's Service (MEPA) calendar (now discontinued as every union started printing their own calendar) and opened up the pages of all Shipping Companies in Finland and heir contact numbers. As it was still lean times in Finnish shipping I had again some trouble finding a job as the HR guys wanted young guys with 30yrs experience.

At last I got a job from an outfit in Helsinki called Pipping & Co. as 1st Officer. They had once been the pioneers in "small tonnage" coasters in Finland but had been sidelined by Rederi Engship & Hans Langh. This I understand as a result of internal squabbling as I heard later from the grapevine.

Anyway, the ships name was m/s Bona Fe and it was a 1972 Dutch built general cargo ship that could load 2815 DWT. She was 70m long and had 2 hatches but no deck machinery in way of cranes or booms. The Company had also another ship called Marika and it gained dubious reputation of once passing by a pilot station with no one on the bridge. 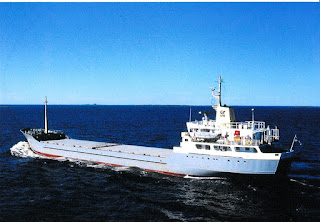 I signed on in Raahe (Brahestad), thats way up north in Finland, a major port exporting steel, in maritime circles called "the arse of Finland", I agree but there is another strong contender that is Koverhar down south, they also export steel and that can be the "hole" of Finland. Both ports are depressing grey factories with smelters and all the related jazz. We generally loaded steel for Goole, UK.

Steel cargoes were easy to load and unload, especially steelcoils, but during winters they were hard to secure and even more dangerous if they got loose in heavy weather. usually the securing were done by us, the crew, as we had no allowance for stevedores, usually we used 2x4in, 6x6in & 4x4in timbers and nails as well as chains to secure the cargo. At least there was no chance it would jump up.

The ship rolled in bad weather with intervals of 12s to abt 35deg lists so anything that was loose would fly. Sleeping was another issue, it took a few days to get accustomed to the bad weather. Also toilet was a bit tricky, the backflow flaps were worn out so when the ship would roll it elicited a nice backwash in case you were still sitting on the porcelain. 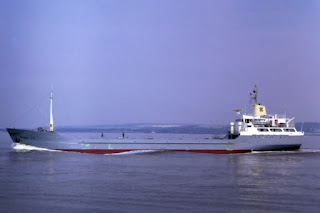 Otherwise she was a very strong workhorse albeit a bit worn out as I recall one drydocking in Marstal, Denmark, we replaced nearly 50sq.m. of bottom plating around 10 cement chests in the ballast tanks.

In summertime we sometimes had to wait for cargoes as the business slowed down and if we were somewhere nice our crew from Porvoo used to put out nets and in the evenings smoke flounders in a barrel on deck. Most delicious seafood one could think of.

After doing 1.5 years on/off on 6 weeks relieving turns I left Bona Fe in 1992 to join a bigger ship with a bigger salary to go further away so I joined up on m/s Atlanta Forest.
at 22:10 No comments: