After my military service I got employed back by Bore Line to Bore Britannica and I guess things were looking a bit up by now in Finnish shipping as they had bought a new vessel to the fleet albeit 2nd hand. I was also given a permanent contract this time.

Britannica was ex APL ship that had been running over the Oceans and she had been modified a few times and had been manned by Brits. To . The covered weather deck was in such a thick rust that one could kick up sheets of it when walking to the forward mooring station. I guess because of the weather deck covering they had fitted the sponsors on the side to improve her stability. 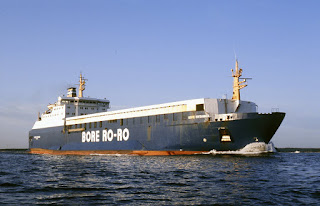 She had as propulsion two V-engine Pielsticks made in Japan that I remember well after I helped out in the engine room doing a haul out of 2 pistons during a stopover in port. By then it became more common to have hired riding crews coming into port and overhaul any due machinery before departure so it was start to finish in one go, be it 24 or 48hrs. In todays STCW resting hours regime this would not fly anymore.

The vessel itself was pretty comfy and worked well, she was just very run down and crew was working hard to bring her up to minimum standard. Company also started saving as she was never painted the signature Bore yellow. The yellow was actually a custom color shade developed for Bore by Hempel and one could hardly see any other yellow ships on the seas as the old conventional style was black or any darkish color to hide the rust streaks.

In 1990 I resigned to join Aboa Mare school and continue my studies to become an OOW (Officer of the watch) as I thought I had gained enough experience as well as my fiancee at that time also pushed for it.